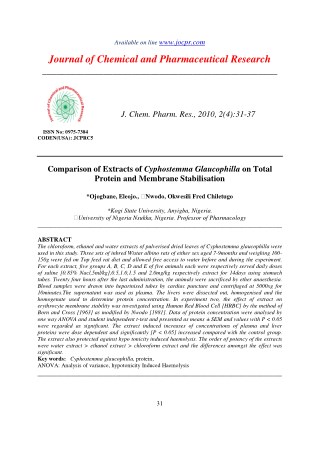 The chloroform, ethanol and water extracts of pulverised dried leaves of Cyphostemma glaucophilla were
used in this study. Three sets of inbred Wistar albino rats of either sex aged 7-9months and weighing 100-
150g were fed on Top feed rat diet and allowed free access to water before and during the experiment.
For each extract, five groups A, B, C, D and E of five animals each were respectively served daily doses
of saline [0.85% Nacl,5ml/kg],0.5,1.0,1.5 and 2.0mg/kg respectively extract for 14days using stomach
tubes. Twenty four hours after the last administration The challenge of stabilisation - . stern review, chapter 8. content. what is stabilisation? why stabilise? optimal

Collapse and stabilisation instead of degrowth? - Why the global debt burden means there will be no recovery richard