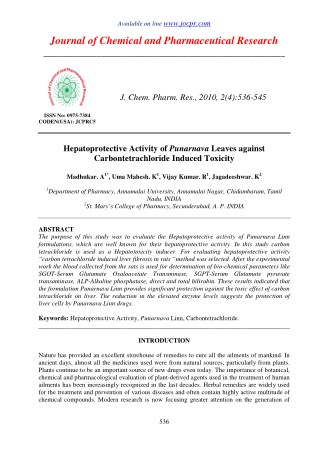 The purpose of this study was to evaluate the Hepatoprotective activity of Punarnava Linn
formulations, which are well known for their hepatoprotective activity. In this study carbon
tetrachloride is used as a Hepatotoxicity inducer. For evaluating hepatoprotective activity
“carbon tetrachloride induced liver fibrosis in rats “method was selected. After the experimental
work the blood collected from the rats is used for determination of bio-chemical parameters like
SGOT-Serum Glutamate Oxaloacetate Transminase, SGPT-Serum Glutamate pyruvate
transaminase, ALP-Alkaline phosphatase, direct and total bilirubin. These results indicated that
the formulation Punarnava Linn provides significant protection against the toxic effect of carbon
tetrachloride on liver. The reduction in the elevated enzyme levels suggests the protection of
liver cells by Punarnava Linn drugs. Study of Hepatoprotective Activity of Saussurea Lappa Root Extract - The plant under evaluation was saussure a lappa, a

TOXICITY OF NUTRIENTS - . nutrients. many food chemicals are nutrients. nutrients are necessary for growth,