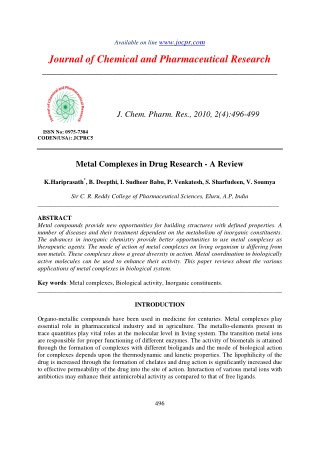 Metal compounds provide new opportunities for building structures with defined properties. A
number of diseases and their treatment dependent on the metabolism of inorganic constituents.
The advances in inorganic chemistry provide better opportunities to use metal complexes as
therapeutic agents. The mode of action of metal complexes on living organism is differing from
non metals. These complexes show a great diversity in action. Metal coordination to biologically
active molecules can be used to enhance their activity. This paper reviews about the various
applications of metal complexes in biological system. Metal Complexes - . metal cation is attached to a group of surrounding molecules or ions ( ligands ) by coordinate

Transition Metal Complexes - . ligands. atom, ion or molecule which can donate a pair of e - to a metal ion ligand 

Metal Complexes -- Chapter 24 - . metal complex -- consists of a set of ligands that are bonded to a central metal ion

Trans-Influence in Cobalt Metal Complexes - . by angel peng . introduction. hypothesis : the nature of the x ligand can

Trans-Influence in Cobalt Metal Complexes - . by angel peng. introduction. hypothesis : the nature of the x ligand can be

Transition Metal Complexes I - . the structures, nomenclature and isomers of coordination compounds. coordination