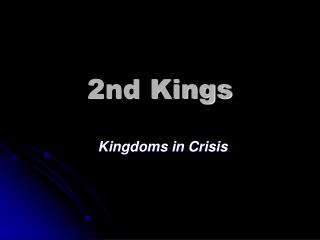 2nd Kings. Kingdoms in Crisis. Purpose of the Books of Kings. To Answer the Question: “How did we get here?” To Give a Warning of the Consequences of Sin. To show our need for the ultimate King of Righteousness. An Outline of 1st & 2nd Kings. Dan. ISRAEL. Samaria. . . Penuel. .

Kings - . by: liebe schler. king edward the confessor. he was king from 1042 to 1066 his father is ethelred the unready

Kings - . the bible course. document # tx001079. the call for a king. following the time of the judges, the israelites

Kings - . the bible course. document # tx001079. the call for a king. following the time of the judges, the israelites

Vapor Kings - Cigarette causes cancer and many other life taking diseases that you aren’t aware of. if you can’t give

Kings value - Today we are going to learn how to bet with our value tips step by step with pictures and examples. step 1.

Roman Kings - . and the founding of rome. the aeneid. aeneas escaped from burning troy with his father, anchises , on his

The Kings - . samuel. samuel is a priest. he is seen as the last of the judges, the first of the prophets. he warns the