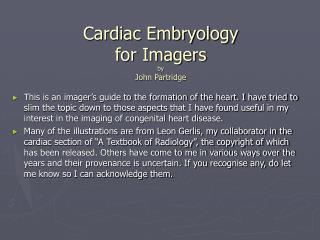 Cardiac Embryology for Imagers by John Partridge. This is an imager’s guide to the formation of the heart. I have tried to slim the topic down to those aspects that I have found useful in my interest in the imaging of congenital heart disease.

What’s Up for Imagers - . the sharpless catalog january 2011 b. waddington. it’s nebula season. not many galaxies

Embryology For Freshers … - . the embryonic period. 1 st 8 weeks worth of growing and changing split into 23 stages (we

Embryology - . making and growing babies. embryology . the study of formation, growth, and development of organisms

Embryology - . chapter 28. stages of development. pregnancy is fertilization to birth gestation period is last menses to

Embryology - . the study of embryos, encompasses the study of the development of animals deals with ontogenetic

Embryology - . announcements. *there will be no quiz next week *be prepared for the presentation -group members

Embryology - . from egg to embryo a. terms 1. pregnancy – events occurring from the time of fertilization (conception)

Embryology - . image from: http ://earthhopenetwork.net/forum/showthread.php?tid=706. essential question: how do we get