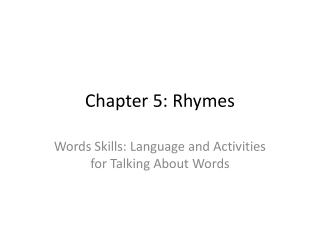 Chapter 5: Rhymes. Words Skills: Language and Activities for Talking About Words. Before we begin. Beware of heard , A dreadful word, It looks like beard, But sounds like bird What is the point of this poem? What are they poking fun at?.