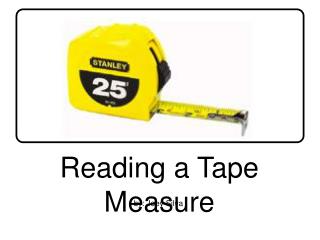 Reading a Tape Measure. by: Joey Silva. Imperial Units System. Imperial units or the __ __ is a system of units, first defined in the British Weights and Measures Act of 1824, later refined (until 1959) and reduced. Tape Measure - Tips for tape measure review : one of the most popular,

How To Read A tape Measure - . most tape measures are divided into 1/16 th of an inch. when measuring use the closest

Tape-Assisted Reading - . this approach to reading has a rich history and has been shown to be especially effective with

Ultrasonic Tape Measure Group 19 - What is utm?. the ultrasonic tape measure (utm)is a device that will measure

Beyond the Tape Measure and Scale - . what is equipment control about? dina kowalyshyn, naval architect vice chairman of

Promotional Truck Tape Measure at My Promotion Australia - Are you looking for promotional tools to promote your brand?

A Complexity Measure - . thomas j. mccabe presented by sarochapol rattanasopinswat. introduction. how to modularize a

Is Business A Cassette Tape? - Creating a custom message might might be an easier task. but actually it is not. creating