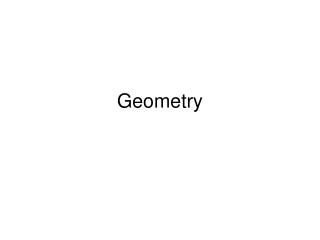 Geometry. Points, Lines, and Planes. A point is the most fundamental object in geometry. It is represented by a dot and named by a capital letter. A point represents position only; it has zero size (that is, zero length, zero width, and zero height). B. Geometry Solid Geometry - . warm up. determine whether the two polygons are similar. if so, give the similarity ratio.

Geometry Solid Geometry - . warm up. determine whether the two polygons are similar. if so, give the similarity ratio.

Geometry - . lesson 3 – 4 equations of lines. objective: write an equation of a line given information about the

Geometry - Section 8.7 notes. geometry. 8.7 dilations. a dilation is a transformation that either enlarges or reduces the

Geometry - . 9.1 an introduction to circles. circle. the set of all points in a plane at a given distance from a given

Geometry - . grades 3-5. goals: . b uild an understanding of the mathematical concepts within geometry, measurement, and

Geometry - . mr. moreno. food for thought. what would you think of somebody that goes to the police academy but does not

Geometry - . lesson 6.2a – transformations: translations and dilations. cgt.5.g.5 draw and interpret the results of

Geometry - . 9.7 circles and lengths of segments. q. s. x. r. p. theorem. when two chords intersect inside a circle, the

Geometry - . 5.4 special parallelograms. set up a flow chart to fill in as we go. rectangle. a quadrilateral with four

Geometry - . fun at every vertex. order of operations. decimals! addition and subtraction. 33.7-2.5=?. line up the