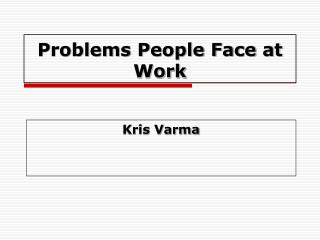 People at Work - . evs. grade-2. people at work. learning objectives. in this lesson we will learn about occupation

People at Work - . risk management for work-related psychological injury. session overview. what is people at work why is

More People at Work - . made by : marnix marie danny louwes mark leeuw koen matser. index. how to get more people at work

When I’m at work: Solving problems - . have you had a problem at work? do you wish you had handled it better?. 2. if

Work problems - . mr. dodson can paint his house by himself in 4 days. his son needs two additional days to complete the

Work problems - . #22: an experienced bricklayer constructs a small wall in 3 hours. the apprentice (you) completes the

Work Problems - . 1. pump a can unload the lunar petro in 30 hours and pump b can unload it in 24 hours. because of an

Helping People be Better at Work - . “generations in the workplace” dealing with the issues and the

Helping People be Better at Work - . “legal services” available to you through your workplace. who is eligible?. eap

Helping People be Better at Work - . “legal services” available to you through your workplace. who is eligible?. eap