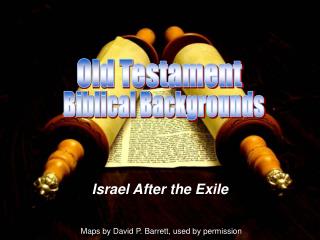 Old Testament. Biblical Backgrounds. Israel After the Exile. Maps by David P. Barrett, used by permission. By the rivers of Babylon, There we sat down and wept, When we remembered Zion. 2 Upon the willows in the midst of it We hung our harps. (Psalm 137:1-2).

Israel into exile - . geography. israel was a popular location... to invade!. desert. history. a divided kingdom it

Exile for the nations of Israel and Judah - . summary of the history. god’s covenant with: abraham, about 1,900bc

The Exile - Getting the big picture: session 9. the exile. nine periods of the old testament. the fall of the kingdom.

Exile - . this is the time that the jews spent in babylon. . sabbath . the weekly day of worship and rest. . synagogues .

Israel after Solomon’s Death - . the temple the death of solomon the divided kingdom. highlights of solomon’s life:.

After the exile Men who dream or Lowered dreams - . 6 th may 2010. old testament timeline. solomons temple. inside it was

After the exile Men who dream or Lowered dreams - . 6 th may 2010. old testament timeline. solomons temple. inside

Chapter 9: The Remnant Making a Home after the Exile - . religion 9 april 2013 mrs. kenny. where are we in the story of

The Long Exile - . by leo tolstoy. quick write. you have been wrongly convicted of murder and sent to a prison far away

The Long Exile Quiz… - . take a minute to compare notes with a table mate to clear up misunderstandings befor e the

Exile : take the power back? - . a christian british airways (ba) employee has lost her appeal against a ruling which

Conquest and Exile - . chapter 13 the fall of the south. after rehoboam. the north had fallen into the hands of the