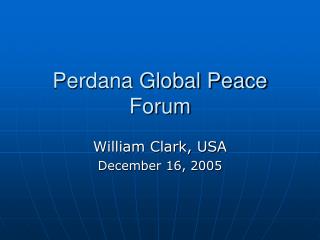 Perdana Global Peace Forum William Clark, USA December 16, 2005 Part I: Energy and War “If you know the history of oil during the 20 th century, then you know 90% of the history.” War and Peace in the 20 th century Contemporary Warfare has traditionally involved two elements:

Global Coalition for Peace - 2. if we do not make a peaceful revolution possible, we will make a violent revolution

Global Coalition for Peace - . presents. “aparigraha” ( non-possessiveness) a new economic paradigm for a culture of