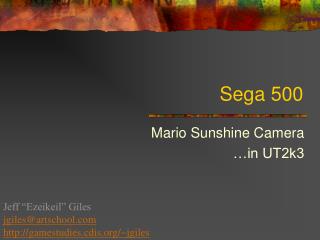 Sega 500. Mario Sunshine Camera …in UT2k3. Jeff “Ezeikeil” Giles jgiles@artschool.com http://gamestudies.cdis.org/~jgiles. Right… . So yesterday we covered the basics of how to break the camera away from the player and have some fun with it. Today . Bug Out Vehicle List - I have heard many people converse about using the family rv, or amusement vehicle, to bug out.

Introduction to Scratch! - . michelle venable-foster barb ericson may 2009. what is scratch?. scratch is a free

Jeff Zadoks - Is a simple and professional person. he is working in post holdings, inc organization as a senior chief

OC ReMix? What the Heck is That?!

Personal Air Vehicle - . by robert brown and nikhil srivastava. contributions from: dr. siva thangam. this is an artist's

Polycom ViewStation SP 128 Camera - . an older system approaching obsolescence but still in use at some locations. aethra

Seasons Artschool the 4 th grade Gazaryan Anna - . there are four seasons in a year. all the seasons are beautiful.