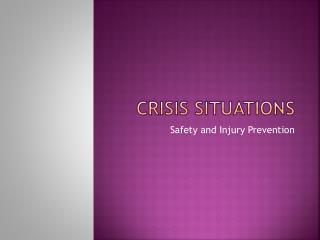 Crisis Situations. Safety and Injury Prevention. Types of Abuse. Abuse - C ontact intended to cause feelings of intimidation, injury, or other physical suffering or bodily harm Child Abuse - maltreatment of a child under the age of 18; can be physical, emotional, neglect or sexual abuse Crisis Situations - . safety and injury prevention. types of abuse. child abuse - maltreatment of a child under the age

Sexual and Reproductive Health Programme in Crisis and Post-Crisis Situations - . what is the sprint initiative?. the

Module 7: Child Rights in Crisis and Risk-prone Situations - . what is your focus?. introduction. emergencies can happen

“The Role of the Diaspora During and After Crisis Situations” - . side event to the ecosoc humanitarian affairs

2 situations - . it takes you 2 hours to drive the 140 miles to san antonio. what can you say about your speed? on the

Ironic Situations: - There is a difference between bad luck and irony. the situations below are all bad luck. none of

STRANGE SITUATIONS - Question 1. in a hants 2 league game, fawley have used their three replacements including making a

Emergency Situations - . in emergency situations it is very important not to panic but to act promptly. emergency

CURRENT SITUATIONS - . tunisia. an ‘explosion’ of uprisings and street protest became known as the jasmine