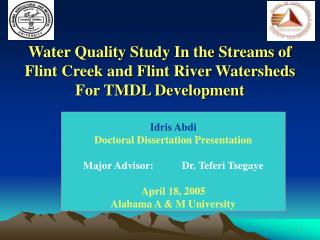 Poetry Project - . by heaven williams. simile flint. an emerald is as green as grass, a ruby red as blood; a sapphire

Setting the Course for Improved Water Quality - . a tmdl training program for local government leaders and other water

Watersheds and estuaries - . rachel l. kennison. what is a watershed???. a watershed can be found almost anywhere. it is

We Are in a Drought: The V iew from the Lower Flint River - . (better days). kinchafoonee and muckalee. ichawaynochaway

Poetry Anthology Project - . by:carlee phillips. simile . flint an emerald is as green as grass, a ruby red as blood; a

Watersheds, Trans-Mountain Diversions and the Future of Water in Colorado - . roaring fork river at lost man canal, above