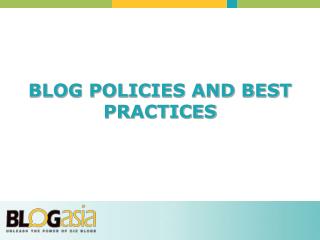 BLOG POLICIES AND BEST PRACTICES. WILL YOU HAVE LEGAL PROBLEMS?. Libel Revealing trade secrets Revealing information before you are legally able to do so. THE MYTH OF TRANSPARENCY. Science, Technology and Innovation Policies in Japan: Lessons and Best Practices - . masuo aizawa counselor to the