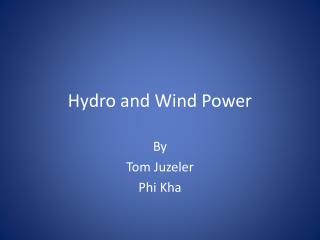 Hydro and Wind Power. By Tom Juzeler Phi Kha. HYDRO POWER. Hydro Power is basically the power derived from the movement of water. Hydroelectricity comes from the damming of the rivers as they flow to the ocean and then releasing the water to turn turbines connected to electric generators. Hydro and Wind Power - . by tom juzeler phi kha. hydro power. hydro power is basically the power derived from the

Power from the Sun: Solar, Hydro and Wind - . dennis silverman u. c. irvine physics and astronomy. solar power. most

Hydro-Power - . how is electricity produced through water?. turned to electrical energy through generator. potential

Hydro Power - . by: gabriel, joyze, christine, ryan f, and joselle. how does hydro power work?. flowing water from a high

Hydro Power - . green power?. what is green power. green energy is a popular term for energy produced from clean,

HYDRO POWER - . flowing water creates energy that can be stored, captured and turned into electricity. hydropower is the

Hydro-power - . by: shaun, kaitlyn, and allison. dams. the dam stops and controls water flow the intake is where the

Hydro Power - . jun kim. hydro power. hydropower , hydraulic power or water power is power that is derived from the force

HYDRO POWER - . hydroelectric power: how it

Hydro Power - . robotics 701. hydro energy is energy is taken from water and converted into electricity. the most common

Hydro-power - . by: shaun, kaitlyn, and allison. hydro history. the earliest form of hydropower is from over 2000 years