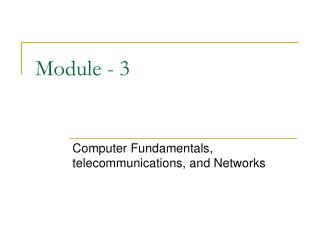 Module - 3. Computer Fundamentals, telecommunications, and Networks. The basic system including keyboard, mouse and monitor. Computer System. A system of interconnected computers that share a central storage system and various peripheral devices such as a printers, scanners, or routers.

Module 18: One Way ANOVA - . this module begins the process of using variances to address questions about means.

LOW VOLTAGE INHIBIT MODULE (LVI) - . module objective. by the end of this module you should be able to: understand lvi

Module 5B - . introduction strategies for working with clients with co-occurring disorders: techniques for a working

Module 3 - . operational amplifier. brainstorming session…. what does an amplifier do?. what is an ic?. integrated

Entrepreneur in the Classroom Module 3: Turning an Idea into a Business - . module 3 objectives. learn the basics of

Module 3 - . lesson 18. objective. order numbers in different forms. sprints. put your name and number at the top of the