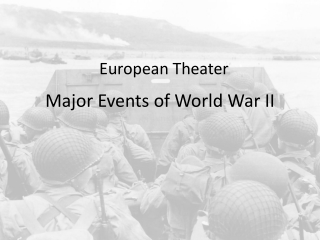 Can you name the year in which these events happened in the World Cup? - . clue – all the events come from separate

Major events of the crusades - . by: deni fabina &amp; tarissa reed. children’s crusade. around the time of 1212,

Imperialism or… The Beginning of Us Ruling the World - . manifest destiny!. xxxxxx. performance indicators •

What events led to World War I? How did these events affect America? - . what do you know about wwi?. complete the k part

Manifest Destiny Timeline - . on the back of your manifest destiny map worksheet, create a mini-timeline of the major

Major event legacy – what next beyond 2012 - . synopsis. using major sports events can be a real focus for wider

Setting up an Event In World in Second Life - . daniel brunk oct 16, 2007 sjsu. first things first…. events can be