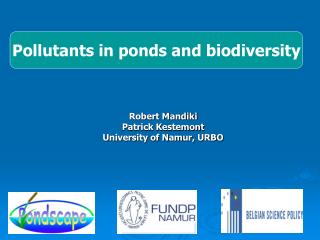 Pollutants in ponds and biodiversity. Robert Mandiki Patrick Kestemont University of Namur, URBO. Introduction. Indeed, high accumulation of some pesticides may disturb various physiological mechanisms of aquatic organisms, such as: Patrick Manning University of Pittsburgh - The challenge of historical data: research and institution-building for a

Robert Elliott University of Strathclyde - Person-centered science: what we know and how we can learn more about

Robert McMaster, University of Glasgow - Some observations on stephen dunn’s ‘ the modern food industry and public

ROBERT MORRIS UNIVERSITY - . football. formations / motions / shifts. why. what makes a defense get to a base or prepared

Jeroen Darquennes (Namur) - The acquisition and development of metalinguistic skills: challenges and opportunities in rml

Robert J. Willis University of Michigan - Health and ageing-lifetime research: longitudinal studies from home and away

The Robert Gordon University - 18/09/2012. the robert gordon university. 2. aim of lecture. outline the steps involved in