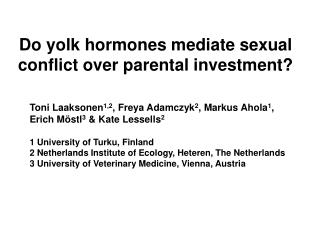 Psychological and Parental Competency Evaluations - . helen t. brantley, ph.d . who is the client?. for parental

Endocrine System - . hormone is a chemical messenger secreted by one endocrine gland or cell into the bloodstream and

Sexual Selection - . selection for traits which are solely concerned with increasing mating success is usually referred

ENDOCRINE SYSTEM - . physiology. hormones. a chemical secreted by a cell or groups of cells into the blood for transport