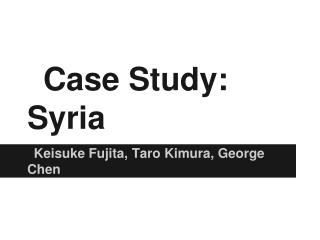 Case Study: Syria. Keisuke Fujita, Taro Kimura, George Chen. Syria. Population of 22,530,746 Leader: President Bashar al-Assad Muslim is not a state religion, but the president has to be one in the constitution. Current civil war has ethnic divides Syria - . 27 months of internal struggle has only led to death &amp; displacement of syrians, deterioration &amp;

SYRIA - سوريا. syria. أزمة للأطفال؟. a children’s crisis?. inside syria. what do you know

Syria =) - . location. syria is in southwest asia. it is surrounded by the countries: turkey, iraq, jordan, israel, and

Syria - . government. after wwi, was colonized by french after wwii, gained independence but politically unstable as

Syria - . jacqui southey unicef nz. syria. “as the eyes of the world focus on the mounting violence in syria, we must

Syria - . censorship in the country by: david boukengolts &amp; ian smith. the country. the leader of the country,