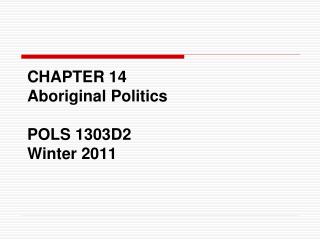 CHAPTER 14 Aboriginal Politics POLS 1303D2 Winter 2011. Native Demographics: Who and How Many?. 1,678,200 people, or about 5.4 per cent of the national population, gave as their ethnic origins North American Indian, Métis, Inuit, or a combination of one of these with some other ethnic origin. CHAPTER 13 Diversity and Politics POLS 1303D2 Winter 2011 - . the emergence of diversity politics. canada has always been

POLS 373 Foundations of Comparative Politics - [terrorism is] ... the deliberate creation and exploitation of fear