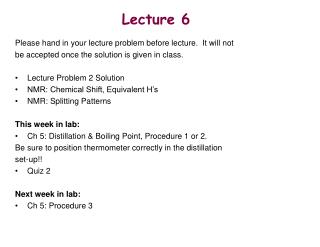 Lecture 6. Please hand in your lecture problem before lecture. It will not be accepted once the solution is given in class. Lecture Problem 2 Solution NMR: Chemical Shift, Equivalent Hâ€™s NMR: Splitting Patterns This week in lab: Ch 5: Distillation & Boiling Point, Procedure 1 or 2. Lecture 6 - 4.5 generalized permutations and combinations recap r-permutations: the number of ways in which we can draw

Lecture 6 - . shortest path problem. quiz sample. true or false every dynamic programming can be analyzed with

Lecture 6 - . attitudes and attitude change. outline. what is an attitude? definitions 3 categories of evaluative