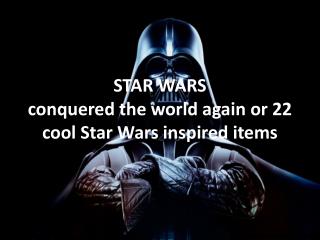 Who doesn’t love Star Wars? Show me these people! Couldn’t find anyone? It’s not a surprise at all because this astonishing movie doesn’t leave anyone indifferent! Recently, word leaked out about the beginning of the work on the new episode of this tremendous space saga. Such news blew up the Internet with a storm of positive emotions, not for nothing! We are waiting for the movie release really much as well, that is why we have started preparing for a premiere as true fans: namely, we have found 22 super items inspired by Star Wars. We want to buy them all! And what about you? Before we begin, please make yourself comfortable and complete the STAR Pre-Test Quiz - . standardized testing and

WORLD WAR I - . the great war the war to end all wars the war to make the world safe for democracy. map of europe 1914. 4