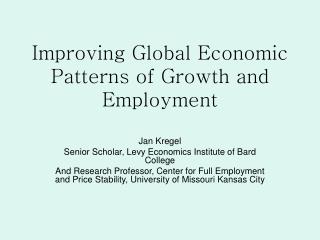 Improving Employment - . new innovative projects for activation and reintegration of people. why ?. … the importance of

Patterns and Growth - . john hutchinson. problem 1: how many handshakes?. several people are in a room. each person in

Pattern of growth and employment - . a case study of argentina umkc, may 2006. job creation is not independent of the

Efficiency of Research and Innovation Systems for Economic Growth and Employment - . introduction at the 2014 erac mutual

Working Patterns Employment - . introduction. they can be both adjustable to a certain individual's preferences and can

Chapter 9: Global Economic Growth and Development - . according to your text, which of the following countries currently

Growth Patterns - . learning intentions. i can explain that growth is an increase in mass i can state several ways as