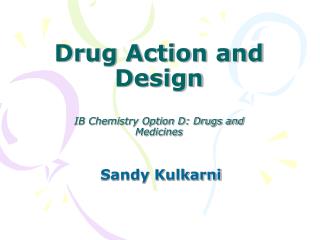 Drug Action and Design IB Chemistry Option D: Drugs and Medicines. Sandy Kulkarni. Drug Action. The effectiveness of a drug is often related to the chemical structure and polarity of the substance . Factors that affect how a drug reacts include: Chirality Geometrical isomerism Ring strain Medicines are Drugs - . a medicine or drug… changes how your body works, or treats or prevents a disease or symptom.

The Organic Chemistry of Drug Design and Drug Action - Medicinal chemistry. the science that deals with the discovery or

Drug Use, Regulation, and the Law - Modern guidelines for controlling drug development and marketing. society has the

Chapter 9 - . understanding drugs and medicines. drugs. drug: any substance that causes a change in a person’s physical

Types of Medicines - . drug -a substance other than food that changes the way the body for mind functions. medicine - a

Medicines and drugs - . option d part 1. what is a drug? what is a medicine? what is the difference between a drug and a

Illegal Drugs - . an illegal drug is a chemical substance that people of any age may not lawfully manufacture, possess,

Chapter 1 Opener - . psychopharmacology. the emphasis of this discipline is on drug induced changes in mood, thinking,