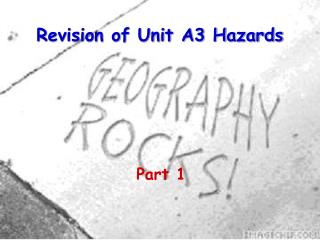 Revision of Unit A3 Hazards. Part 1. The next 4 weeks: Hazards. Key idea 1: Some places are more hazardous than others. Key idea 2: Hazards have an impact on people and the environment. Key idea 3: Different levels of economic development affect how people cope with hazards. Hazards Week 1: . A3 Hazards - . lesson 6 measuring weather. why measure the

Revision of unit 1 - . 8th grade. what is the nationality of the usa?. it’s american. what language do people speak in

Unit 1 revision - . chapter 1 – causes of disease. what is a pathogen? a micro-organism that causes disease how do

UNIT 4 REVISION - . plasticity. ivan pavlov and his dogs. the key elements of classical conditioning. the neutral

Revision Unit 2 - . new historicism ii part. ideological opposition is manifested in the text , through the way in which

Unit 5 Revision - . chapter 9 – responses to stimuli. fill in the blanks to show your understanding of stimulus and

Unit 1 Revision - . topic 1: restless earth. what are the main things i need to know?. how and why tectonic plates are

Unit 1 Revision - . section a. how to respond…. immediately address the question

Unit 4 revision - . area of study. knowledge and evaluation of the contemporary state of natural environments and the