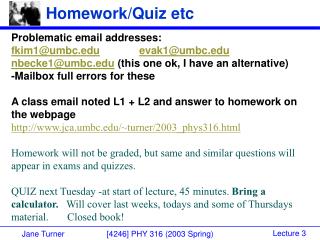 Homework/Quiz etc. Problematic email addresses: fkim1@umbc.edu evak1@umbc.edu nbecke1@umbc.edu (this one ok, I have an alternative) -Mailbox full errors for these A class email noted L1 + L2 and answer to homework on the webpage http://www.jca.umbc.edu/~turner/2003_phys316.html Have a Seat and Get out your homework that is on the overhead - . please have a seat. begin working on your subatomic

13 September 2011 - . objective: you will be able to: review chapter 2 concepts homework quiz: give the number of protons

Homework Quiz - . describe the transformations of this function from its parent graph. discussion. the “log base 9 of

Turn in homework Study on your own with flash cards Take quiz ma mi mu me mo ya yu yo - . hiragana bank.