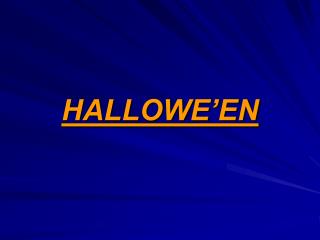 HALLOWE’EN HALLOWEEN: A FAMILY TRADITION For many people Halloween is a tradition; many join in the celebration of this supposed “holiday” without giving any thought to what is being celebrated.

Hallowe’en - . 2008. the university of stirling and macrobert in association with the ahrc global gothic network

HALLOWE’EN - . halloween: a family tradition for many people halloween is a tradition; many join in the celebration of

Fat Old Witch by Leland Jacobs - . the strangest sight i’ve ever seen is a fat old witch in a flying machine the witch

Good Evening How was your Halloween ? - . heading. lament for lucy. objectives. to examine a new poem (hurray ). to

Halloween - . what does halloween mean?. the word halloween comes from  all hallow even , or all hallows’ eve . hallow

Halloween - . halloween is an annual celebration held on the night of october 31, especially by children dressing in

Halloween... - Halloween. ...is a holiday tradition celebrated in many countries. ...is especially popular in the usa,

Halloween - . the origins of halloween. halloween is celebrated annually. the origins, comes from a corruption of all

Halloween Jokes..and Songs - . test your comedic skills…give yourself a point for every joke you answer correctly.

Introduction to Night and the Holocaust - . objectives:. to understand the background of the holocaust and its

Night at the Museum - . by: megan abadom. neil armstrong. neil alden armstrong is an american aviator and former

Pagan Easter - . like other holidays such as hallowe’en and christmas, easter is an ancient pagan festival given new

The Night of San Juan - . vocabulary practice. the trumpets ______ as the olympic ceremonies began. mischievous.