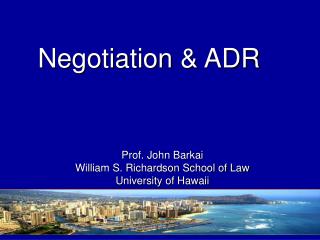 John Barkai University of Hawaii School of Law - . communication across cultures. inside the heads of my communication

Issues for Sophisticated Users of Construction Mediation: When, How, and by Whom? Prof. John Barkai William S. - N school

University of Hawaii - . year-end and other accounting issues. presented by financial management may 21, 2008. general

John Richardson - The under-attainment of ethnic minority students in higher education: what we know and what we don’t

A History of Hawaii - . 1778 captain james cook and the crews of the hms resolution and hms discovery sight o‘ahu,