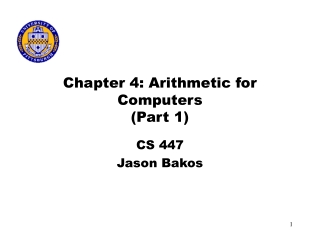 Chapter 4: Arithmetic for Computers (Part 1). CS 447 Jason Bakos. Notes on Project 1. There are two different ways the following two words can be stored in a computer memory… word1 .byte 0,1,2,3 word2 .half 0,1