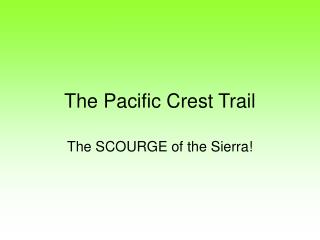 The Crest - The crest. a luxury home at its best and a brand new condominium with plenty of great things to offer.

The Pine crest - Insights about the pine

DLF The Crest - Be it high – class, way of life or comfort dlf the crest details them all with élan and large

CREST - . center of excellence in formal methods in programming ralph-johan back director. it in turku. ict-house. tucs.

The Oregon Trail - . by brianna hernandez. in the oregon past. it took about 6 months to get there they usually left in

The Oregon Trail - . you will be collecting information about the oregon trail using a series of websites. using the

The Prospector’s Trail - . by: cathy jewison. literary devices. foreshadowing: ‘“we’re living in a tent. this is

The Oregon Trail - . pay attention now so you can play the game later. oregon trail activities. one paper per person make