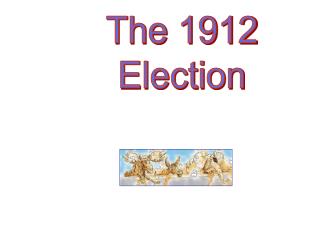 The 1912 Election. The Candidates. The Republican Party & President William H. Taft. Keep the Whistle Blowing!. Taft was determined to defeat TR and preserve the conservative heart of the Republican Party. Come, Mr. President. You Can’t Have the Stage ALL of the Time!. The 1912 Presidential Election - . dylan cook poli 423. context of the election.

The Election of 1912 - . simplifying this complex event. questions facing america in 1912. should america be a capitalist

The 1912 Election Key Issues - . 1912 election. tr runs against taft for the republican nomination. tr is not nominated

1912: The Election that Changed the Century - . the candidates and key issues. the progressive party &amp; former

Studying the Progressive Era Through the Election of 1912 - . the election that shaped the course of the 20 th century.