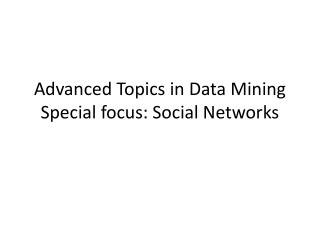 Advanced Topics in Data Mining Special focus: Social Networks. Goal of the class. Address major trends in the analysis of social-network data Get you involved and interested Do something fun and cool. What is a social network?. Facebook LinkedIn …. Advanced Topics in Data Mining Special focus: Social Networks - . reminders. by the end of this week/ beginning of next