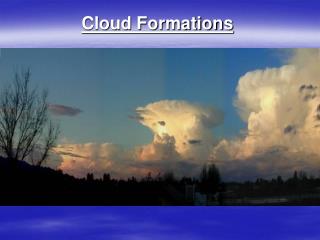 Bond Formations - . megan cunningham brenton langston . what is bond formation. it’s a chemical bond that is not an

Football Formations - . gcf102882 raul thomas. a formations is the way a soccer team lines up its defense, midfield, and

Cloud Formation - . formation of clouds requires a mechanism that results in the uplift of air. first, recall. adiabatic