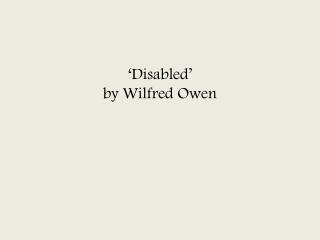 ‘Disabled’ b y Wilfred Owen. Tone :. Structure 1 : There is rhyme but it is uneven: Dark / park; grey / day; hymn / him Trees / knees / disease; dim / slim; There is also internal rhyme: Play / day Why is this important? Wilfred Owen - . by: gabby jarman. background information. wilfred owen was born on the 18 th of march 1983 in oswestry,

A New Heaven, Wilfred Owen - Links to the 10 commandments in ‘thou shall not kill’ media portrays war as heavenly via

DISABLED Wilfred Owen - . what injury has this soldier experienced? how do you know? . he has lost his legs. he is

Wilfred Edward Salter Owen 1893 - 1918 - . the young soldier it is not death without hereafter to one in dearth of life

Wilfred Owen – Poetry of the First World War - . what do you know about the first world war? make a post-it rope.

Futility By Wilfred Owen - . images of war. look at these images and write down the feelings they evoke what they say