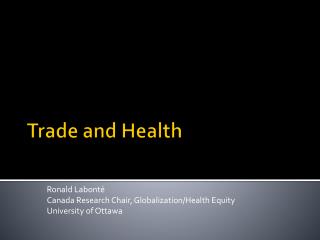 Ronald Labonté Canada Research Chair, Globalization/Health Equity University of Ottawa. Trade and Health. To trade or not to trade?. That is not the question! Trade endemic to human societies, global trade as old as human settlements What changes is our notion of ‘global’ The questions: International Trade in Health Services and the GATS - Presentation at cpha vancouver, bc, may 30 th , 2006 chantal

International Trade in Health Services and the GATS - . presentation at the ceec, la havana, july 13-14, 2006 chantal

Know more about Factory, Health and trade license - Those who want to open a factory they need factory, trade and health

Global Trade and Its Impact on Public Health - . lily walkover, cpath fellow center for policy analysis on trade and

International Trade in Health Services and the GATS - . presentation at cpha vancouver, bc, may 30 th , 2006 chantal

Trade Programs and Trade Agreements - . listed in the general notes lets look at the handout and the resources section of

Development, trade and trade negotiations - . some questions and a few answers based on the case of costa rica. a

Trade and Gains from Trade - . main concepts. you should know how to effectively use, define and numerically analyze the