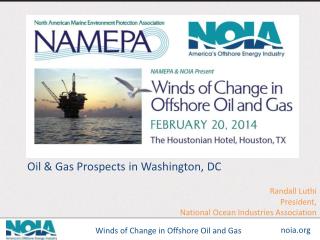 Oil & Gas Prospects in Washington, DC. Randall Luthi President, National Ocean Industries Association. "That depends a good deal on where you want to get to." "I don't much care where –Then it doesn't matter which way you go.” Lewis Carroll, Alice in Wonderland. National Ocean Policy - . a national policy for the stewardship of the oceans, our coasts and the great lakes –

National Ocean Policy - The role of science in a national ocean policy dr. robert b. gagosian president and ceo ocean

National Rehabilitation Association - . you and nra : a winning combination!. nra history. from its beginning in 1925,