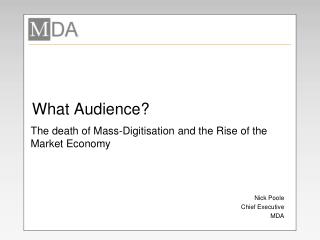 What Audience?. The death of Mass-Digitisation and the Rise of the Market Economy. Nick Poole Chief Executive MDA. We used to say that an infinite number of monkeys, given an infinite amount of time, would re-create the works of Shakespeare.

Emotive Language - . choice of words packed with emotion can influence an audience for or against your ideas, to be with

Audience Etiquette - . a doctoral defense is a formal presentation. if you are in the general audience (not formally

DO I KNOW MY NURSERY RHYMES? - . click anywhere to begin. who are you?. teacher student. teacher:. target audience

Can You Hear Me Now? Creative Marketing To Your Captive Audience Is The Key to Success - . sewer service… so easy a