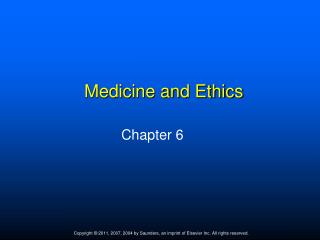 Medicine and Ethics. Chapter 6. Introduction. Ethics concerns itself with the philosophies underlying ideal relationships between human beings, as well as the promotion of the highest good for humanity as a whole. Medicine and Ethics - . chapter 6. introduction. ethics concerns itself with the philosophies underlying ideal

ETHICS IN MEDICINE - Patients must be able to trust doctors with their lives and wellbeing. to justify that trust, we as

Ethics and values based medicine - . abortion is permitted at 26 weeks:. a - to prevent the death of the mother b - to

Ethics in Conservation Medicine - . october 3, 2012. what are ethics?. “the discipline dealing with what is good and

Ethics in Sports Medicine - . chapter 9. what are ethics?. help define acceptable behavior among members of a group.

Complementary and Alternative Medicine: Science, Pseudoscience, and Ethics - Outline. what is cam?philosophies of cam and

The Hippocratic Oath and the Ethics of Medicine - . steven miles, md university of minnesota. believed to be the only