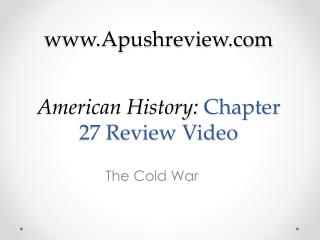 American History Chapter 6: The Expansion of American Industry - . iv. the great strikes. bellringer. your employee has

SOL Review: American History - . 1920s. in the united states, the red scare of 1919 and the mccarthy era of the early

Chapter 1.1 A Brief History of Video Games - . (note the use of the term &quot;video&quot; and not