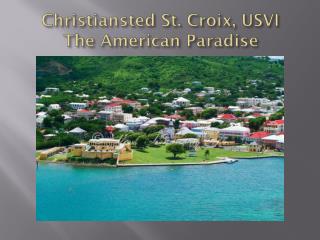 St. John USVI Vacation Villa Rentals - St. john us virgin island is an amazing vacation destination in the caribbean. it

The Best-Loved Hidden Treasures of St. Croix - If you have been day-dreaming a seaside vacation, bring it to life at st.

St. Croix River Association May 11, 2012 - We care for what we know and love the case for healing the broken bond between

The Bottom Lines for the USVI