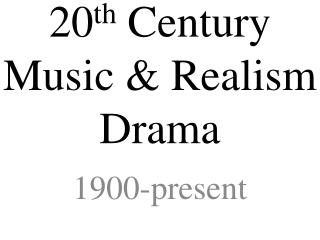 Chapter 13 Early 20th-Century Novels - . from an outline of english literature by thornley and roberts. english novels of

RADIO DRAMA - . about radio drama. radio drama is a form of audio storytelling broadcast on radio. with no visual

Elements of Drama - . drama. the word drama comes from the greek verb dran , which means “to do .” the doing/acting

History of Drama - . greek drama. origins of greek drama. began in the 6 th century b.c. as part of the worship of the

Romanticism to Realism - . realism last quarter of 19 th century in some ways a reaction against romanticism and what

What years are you reminded of by this picture ? - . first oral presentation. teams of two students presentations subject