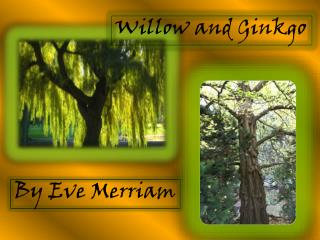 Willow and Ginkgo. By Eve Merriam. Willow and Ginkgo. Discuss: Have you ever looked at something common in a new way?. Why would we take the time to examine an everyday object with fresh eyes, new attitude, or from a different angle?. Literary Analysis. Simile: Chrismas eve - . when it is chrismas eve i sit at the camp fire it is fun .my favrite part of chrismas is when we open

Eve Ensler - . &quot;eve ensler is the pied piper. she is leading women and the world to a different consciousness of

Eve Bunting - “i like to write picture books that make young people ponder, that encourage them to ask questions.”