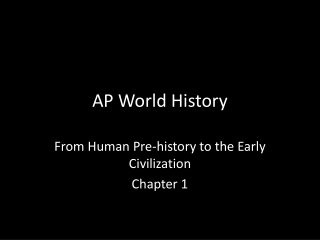 AP World History. From Human Pre-history to the E arly Civilization Chapter 1. What is prehistory?. The things that happened to humans before their was written records. It is a lot like a vast black space penetrated by only an occasional pinpoint of light, representing our current knowledge. AP WORLD HISTORY - . telescope or microscope – or a bit of both?. 5 thematic periods of history. foundations (8,000

AP World History - . mrs. chamberlin welcome!. writing prompt tues. 8/25/10. what did you find most interesting in your

AP World History - . geography you need to know to pass the ap exam. there are 8 main regions of the world you need to

AP World History - . unit one: foundations. think about the “big picture”. trying to learn every detail (every king,

AP World History - . writing the dbq: thesis statement. document based question (dbq) essay. you will have 40