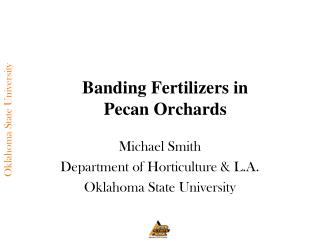 ‘Apalachee’ Pecan - . tommy thompson and l. j. grauke. the apalachee are one of the principal native tribes of

Career Banding - . what is career banding?. a new human resources system that affects the way we classify jobs hire

Fertilizers - . ag-gh/ps-7. what is the importance of proper fertilization of plants?. how are plants fertilized?. soil

Fertilizers - . today’s lesson. fertilizers gases poster wasn’t that ore activity due today??? we will complete an

Fertilizers - . fertilizer. any organic or inorganic material of natural or synthetic origin which is added to a soil to

Fertilizers - . group questions. case study 1: your grandmother wants to build a small garden in her backyard. she lives

DNA BANDING - . what is dna banding?. a method used to identify multilocus dna banding patterns that are specific to an