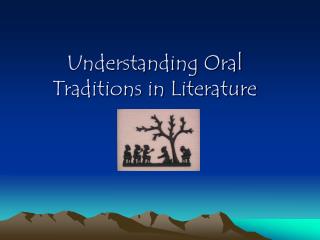 Oral Traditions - . what are folktales. the terms folktales, fairytales, fables all refer to the same things. this genre

Oral Traditions - . homer and the trojan war: history or myth?. do now: 3/20/14. take out your trojan war hw questions to

Oral Literature - . read “the sun still rises in the same sky” on pg. 23, and write down four generalizations about

The Oral Tradition in Literature - . myths, folktales, fables, and legends. the oral tradition in

Ancient Literature (myths, origins, and traditions) - . the origins of story and