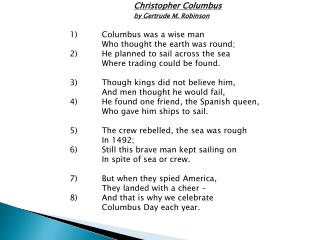 1492 - . answer:. christopher columbus sails west to find a faster all-water route to asia and lands in the caribbean

1492 - . the greatest story ever forced upon students for over half a millennia. what we know. the sighting. 1492,

Europe Before 1492 - . objectives. describe the conditions in europe in the fifteenth century. analyze how the changes

Early Exploration 1492-1600 - . reasons for exploration. prince henry the navigator. son of king john i of portugal

In 1492 Columbus Sailed the Ocean Blue - . the age of exploration. who really discovered america?. possibly phoenicians