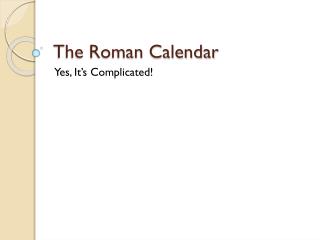 The Calendar - . from julian to gregorian. florentine calendar. u sed during the middle ages the rest of europe used the

The Roman - . by eve. roman army. the roman army was made up of groups of soldiers their were five weapons a sword shield

THE ROMAN - . by tom. baths . slaves scraped perfume and oil of the wealthy with a knife called a scrigall woman went in

The Chinese Calendar - How many and which ones would you like ?. the chinese calendar. chinese lunar calendar. dates back

The Aztec Calendar - . this is the aztec calendar, perhaps the most famous symbol of mexico. the original object is a 12'

The Celtic Calendar - . the celtic year is based on the cycles of the moon.it has 13 months that are divided into 8