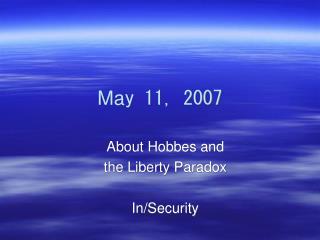 Ma y 11, 2007. About Hobbes and the Liberty Paradox In/Security. Administration. About Discussion Leaders: each week two students will be responsible for leading our class discussion. May 11, 2007 - . bc plan exercising – doing it by the numbers presentation to three rivers contingency planning